Recently, I was told that people are protesting the lock downs because they’re in dire straights, going so far as teetering toward homelessness and literally starving. I found this claim to be quite odd because the last I heard, landlords are prohibited from evicting anyone and that assistance was being given to those who can’t afford groceries or to pay their utilities. Now, I haven’t been able to find reports of people starving on account of this lock down, in fact, the photos I see of protesters, they look inconvenienced at best, but that’s not to say such a problem doesn’t exist. I do try to practice empathy when I can and I completely understand why protesters are upset. What I don’t understand is why they think the solution to their being upset is to put others at risk. 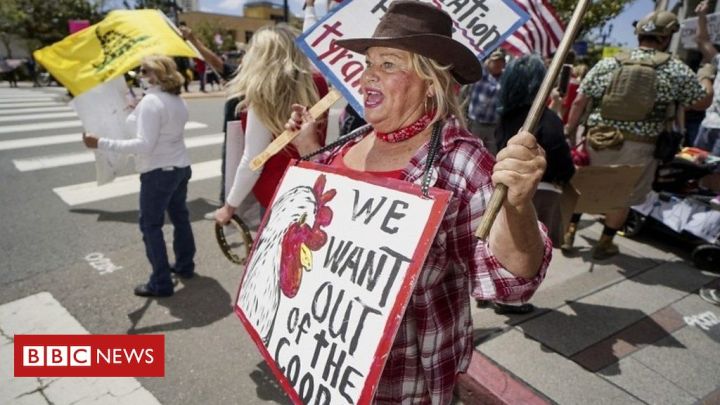 The problem is not the lock downs. The problem is not preventative measures. The problem is the government’s lack of preparation and poor handling of the crisis. How many people have filed for unemployment and how many are still waiting on it? Millions of Americans have applied for it, and from what I’ve heard the process has been glitchy and poorly handled. What I don’t understand is why so many people think the solution is to open businesses back up as a result. We all know the saying “two wrongs don’t make a right”,so why can’t we understand that putting lives at risk in the middle of a pandemic for the sake of employment is ludicrous? The U.S. has more than enough resources to take care of everyone. I haven’t heard a single person dispute this claim. So if the U.S. has enough resources, why do you not insist then, that those resources be spent on the American people?

I just want to grab these protesters, shake them, and scream “WAKE UP!” Our system is broken. It’s not working. And you’re willing to sacrifice the lives of the most vulnerable people in this country to keep it going? You’re either a sociopath or too dense to see what it is you’re doing. Now, I try not to get riled up. I try to understand that a person who hasn’t gotten sick or seen anyone get sick, but has struggled to pay bills and desperately wants to work might be upset with these lock downs. I understand where the anger is coming from. I just don’t understand how it can be so incredibly misdirected. It’s almost like these people have Stockholm syndrome or something. They have been slaving most of their lives to barely make ends meet while others profit off of them and they’re clinging desperately to it.

Why aren’t you angry at the government? Why aren’t you upset about the corporate bailouts? Why aren’t you mad that something could’ve been done sooner to prevent us from being where we are now? (you know, back when our president was calling it all a hoax). That would’ve been a great time to act. No. You’re mad about being protected. I don’t get it.

Another question I have is who’s behind these protests? Who’s making it happen? We know perfectly well how every issue in this country becomes politicized for the benefit of one’s campaign. It’s disgusting. According to the New York Times, most of these protests if not all are being organized by a lot of right wing, oil-funded, conservative groups. Why would you want to be a part of that? Can’t you see by buying in you’ve become a pawn? Do you think those same politicians care if you live or die? Stop supporting them.

“America is now facing three calamities: a deadly contagion, a capricious president and a well-funded right-wing infrastructure willing to devalue human life in pursuit of its political agenda. Some very rich men and women are making this medical disaster worse through their reckless bellows, inflaming people to demand that states open now no matter how many lives that costs.”

That’s not to say there aren’t legitimate people out there who feel their rights are trampled on. Of course you feel that way. We’re not allowed to work. We’re not allowed to go to our favorite restaurants. We’re not allowed to gather. How frustrating. I get it. So then my question to you is what is the acceptable amount of deaths to justify reopening the country? Because I have 3 immuno-compromised people in my family and several immuno-compromised friends. I need to know how many people you think should be put at risk so I know the odds they’ll survive. Do you have a specific number in mind? Or do you think the CDC just doesn’t know what they’re talking about when they say ending the lock downs too soon will result in another wave of deaths.

Now, I don’t wish ill on anyone. Not even the protesters. I don’t want anyone to get sick. I don’t want anyone to go hungry. I don’t anyone to lose their business, suffer, or struggle. Consider for a moment that there are other solutions to getting our needs met and making sure everyone’s safe and okay. It doesn’t have to be through reckless behavior (behavior that resulted in a spike in cases). Consider working together instead. We choose our representatives. Start choosing the ones that value your well being, not your ability to work.