I’ve heard a few people ask this question and I’m wondering the same. In the beginning of February I got extremely sick. I knew immediately that my cough wasn’t allergies or just a cold. I could tell by that nasty taste in the back of my throat that I had some kind of virus. The first day was mostly a nuisance, but by the second day I was completely wiped out. I couldn’t get out of bed. I couldn’t hardly eat anything. My head was spinning. I had a nasty cough and trouble breathing. By the 3rd and 4th day I was running a low grade fever, and I felt like I was going to die. 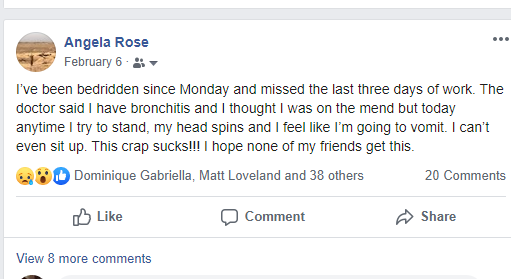 I missed several days of work. I went to the doctor and they told me it was probably bronchitis or some other viral infection. There was nothing I could take except cough syrup for the symptoms because apparently antibiotics are for bacterial and not viral infections. I never get sick like this, and it took nearly 3 weeks for me to finally start feeling normal again. Because this was in February and there were no confirmed cases of Covid-19 in the U.S., I just assumed it was bronchitis and never actually got tested. Now I’m wondering if maybe I had the virus and didn’t realize it.

How soon did Corona Virus make it’s way to the United States? In January, there was a mysterious illness that caused a large number of people to get sick in Chicago. Similar stories about this virus spreading through major cities in the beginning of the year has me wondering how soon it came here. There was a confirmed death by the end of February, but it wasn’t until sometime in March when hospitals really started confirming cases through testing. I wish I had used my common sense back then and distanced myself more. I went back to work sooner than I should have because I don’t like missing work and in the process probably exposed a lot of people to whatever I had. I knew that there was a serious problem happening overseas, but it didn’t occur to me that it had likely spread to the States. Around the time I was feeling ill, many of my coworkers, friends, and students were also incredibly sick.

By March and April we were all being a lot safer, but now I’m worried about how much I might have spread the virus back in February. Again, I don’t know for sure if I actually had it, but I do know that I rarely get as sick as I did and that I had all the symptoms that come with the virus. So if I did have it, do I need to get tested for the antibodies? According to this medical report  knowing who’s been infected and has the antibodies could be useful in developing a vaccine. The sooner we get that done, the sooner we can move on with our lives without fear of a second wave and more cases and deaths. Web MD states that you can get tested after you’ve fully recovered (several weeks or even months) by volunteering to donate plasma at your local blood donation center. Medical contributor Dr. David Agus warns of faulty and fraudulent test kits being advertised to the public and that having the antibodies does not necessarily equal immunity. On CBS news he stated “There is no reason to get a test at the present time unless you’re part of an epidemiologic study, [or] your company wants to know how many people potentially have been exposed. For reasons like that, they’re important. But for personal decisions, right now, they are not to be used, because they do not tell you immunity.” So in the meantime I guess I’ll just wait for further instruction.